A sequencing library consists of a set of DNA fragments for which sequence is to be obtained.  Many sequencing platforms cannot sequence the DNA directly, but require the addition of platform specific adapter sequences to the ends to provide anchorage and priming points for the sequencing chemistry reactions.  The sequencing reaction is designed so that the primer will anneal immediately upstream of the insert to be sequenced, so the first sequence to be generated is the desired insert sequence, and not the adapter.

The addition of artificial adapter sequence on the end of reads in a library will normally cause those reads to fall out of any downstream analysis fairly quickly.  The bases in the adapter sequence will generally have high phred scores as there is no reason for the sequence to be of poor quality.  They will introduce large numbers of mismatches into any genomic alignments causing affected reads not to map to reference genomes.  Assembly with these reads will likewise fail since proper extension will also fail at the point where adapter sequence is reached.

Since the sequence of the adapters used for a given library is known ahead of time, and that sequence is normally not present then it is possible to explicitly screen for that sequence within the library to identify which reads contain adapter and at what distance into the read.  Since the number of different adapters used by the major platforms is relatively small it is even possible to screen for all of the normal adapter sequences as a matter of course.  This will both check for the presence of adapters in the library and also confirm that it is the expected adapter which has been found. 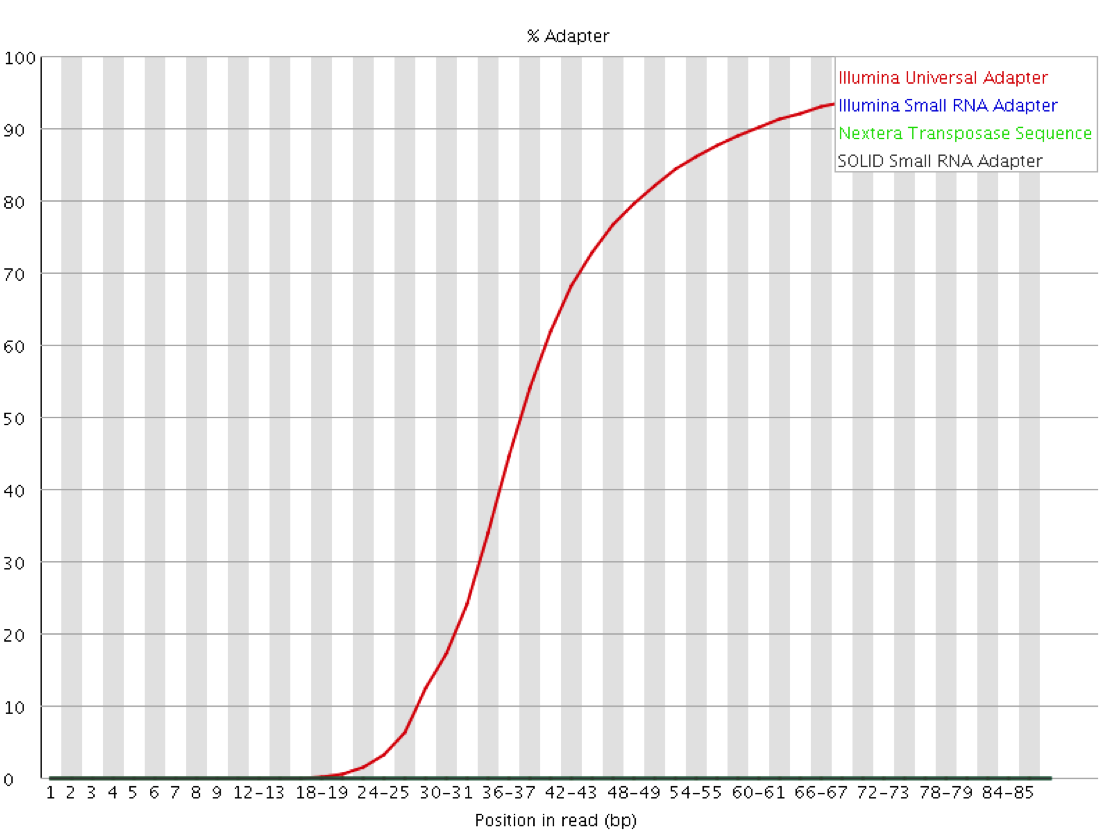 Adapter trimming is the standard approach to removing adapter sequence from sequencing libraries.  In this process a search is performed for the adapter sequence within each read, and the read is truncated to the point where the adapter is found to start.  This kind of trimming is easy when there is a substantial amount of adapter present since there is only a low likelihood that this could be native sequence.  It becomes more difficult where the added length of adapter is relatively short (only a few bases) since small numbers of bases consistent with being adapter could easily be present on the end of a native sequence.  There are a few options in these cases:

The only way to prevent adapter read through would be to either make the inserts longer, or to reduce the length of the sequencing reads performed.  On many platforms there is a practical limit to how long insert sequences can be, and in many cases short inserts reflect underlying biology, so the need for adapter removal may well be around for the foreseeable future.

The presence of read through adapters can be screened for with FastQC.  There are many trimming programs available which all operate in roughly similar ways.  We use (and wrote) trim galore which is designed to automatically detect the correct adapter to trim by looking into the data.  It itself is a wrapper around the cutadapt program which does the actual trimming.

The detection and removal of unknown adapters in paired end data can be performed with skewer.